For ten days at the end of July into early August, Archipelago embarked into a new phase of its summer music camp in Traverse City, Michigan by hosting twenty students from the Baltimore Symphony OrchKids program, Project Music Stamford, and Bravo Waterbury.  These students joined twenty plus local music students from public middle and high school programs for a ten day music camp with the focus of creating original compositions and Jazz/Pop arrangements.  The Archipelago Summer Music camp’s mission is to inspire a connection between communities of different cultural and socioeconomic backgrounds, by using the music ensemble as the vehicle with which to communicate with each other. 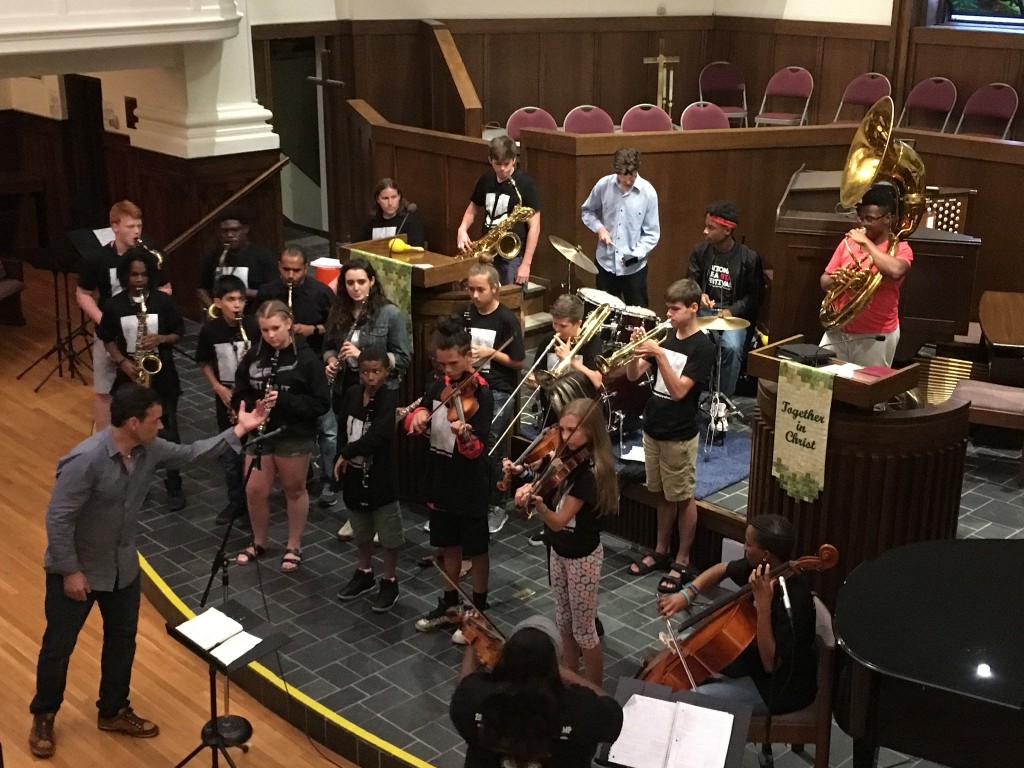 In 2009, Archipelago was exposed to the wonders of El Sistema when we were invited to perform and teach at the nucleo in Acarigua, Venezuela.  This amazing experience had a deep impact on our entire organization and sent us in the direction of using many of the sistema principles in our educational programming.  The one thing that stuck with me the most from our visit to Venezuela, was the statement by Roberto Zambrano, the director of the Acarigua nucleo.  He said that the only way to make true social change was for these programs to be for everyone, not just the poor.  His point was that we need to bring all communities together so we can create more open dialogue and learn more about our differences and similarities.  In his mind, there was no better vehicle than the music ensemble to communicate through. With that in mind, Archipelago started looking for more programming ways to bring music students from different communities together and our summer music camp in Traverse City seemed to be the perfect place to do it.

For the past four years, Archipelago experimented with this concept by bringing two to three students from the Baltimore Symphony OrchKids program to Traverse City and we had them homestay with families of local students who were participating in the camp.  It was so successful that last year we decided to open up the program for even more students from sistema programs to participate.  This past year, twenty sistema students along with teachers and chaperones from their respective programs stayed at the Twin Lakes Dormitory on the grounds of the beautiful Twin Lakes park.

An Intense 10 days of Music Making!

Archipelago’s music goal is to help students develop their own musical voice and to help them realize their potential as young artists by empowering students with ownership of the creative process.  We demonstrate to students how their musicals fundamentals of scales, arpeggios, and chords are not just simple tools to develop technique on their instrument, but are the groundwork for creating music. By unlocking those fundamentals, it opens the doors for these students to be able create their own music and allows their voices and experiences to be truly heard.  Students were broken into two different composition groups and using the theme of First Nation, they created 5 minute plus compositions.  Windbreaker Fair Game.  In addition to creating a composition, students also created two popular musical arrangements using just lead sheets.  Students were given lead sheets to songs that they selected and then were charged with creating the accompaniment parts to the song by using the chord symbols on the lead sheets.  This allowed the students to see how the chord symbols related back to their scales.  In addition to the composition and arranging selections, select students were also given the opportunity to perform Brass Band music with the teacher ensemble.  Students rehearsed daily from 10am-4pm.

In addition to the wonderful music making that occurred during the camp, students also had some great extra-curricular activities that centered around seeing the natural beauty of Northern Michigan.  Students went to numerous beaches on Lake Michigan and had the opportunity to see the Sleeping Bear Sand Dunes.  These activities were a great way for the students to interact with each other away from their instruments and rehearsals.

The impact that the Archipelago Camp had was noticeable in multiple ways. Students were far more confident on their instrument and noticeably took pride in the music they were making.  The relationships they built with students from different programs was amazing.  After our last performance, students were hugging each other and exchanging their contact info and talking about the next time they were going get to see each other and make music together.  Sitting back and watching that moment confirmed what Roberto Zambrano said to me in Acarigua, “Make the program for everyone and you will see interaction and the change you want.”   In that moment he couldn’t have been more correct.

Archipelago Summer Camp will be taking place again at the end of July and we have plans to open it up to even more students and programs from around the country.  We will be sending information out shortly.  In the meantime, you can find out more about Archipelago and its programs by visiting www.archipelagoproject.org or our by visiting our Facebook page.  Please feel free to email us at archipelagomusic@gmail.com if you have any questions or would like to know how to get involved with our summer program.